Yesterday afternoon, during the NEa Renewable Energy and Fuels networking event, the Energy for Transport Registry was launched. With the ceremonial press of a button, NEa Director Marc Allessie, Petrouschka Werther from the Ministry of Infrastructure and the Environment (IenM) and FinCo primary account holder Alex Pechman launched the online registry. This joint launch symbolises the close collaboration between the NEa, the Ministry and the business community in the development of the registry, which has met with a very positive user response. 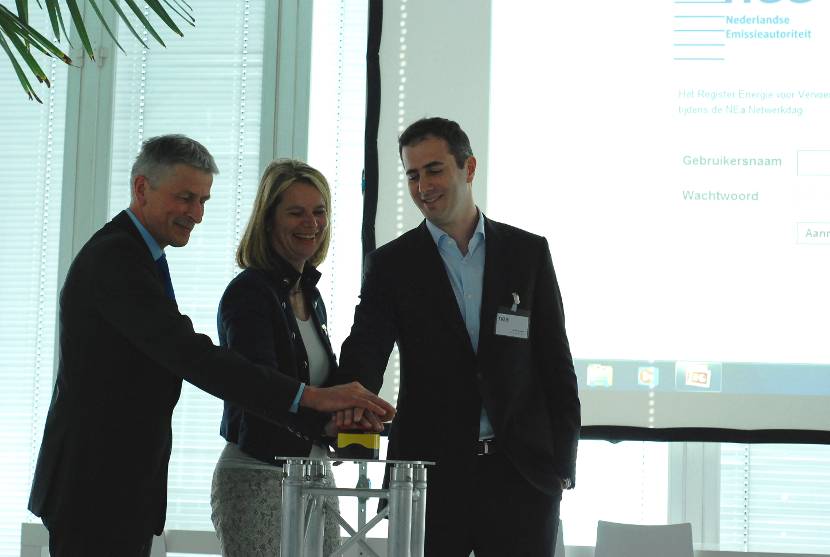 Starting today, companies can use the registry to register the renewable energy they deliver to the transport chain. This allows oil companies to fulfil their annual statutory requirements. Companies can trade their ‘performance’ with other account holders in the registry, allowing the national targets to be reached as cost-efficiently as possible. The registry launch makes the implementation of the new Renewable Energy for Transport laws and regulations (which came into force on 1 January 2015) fully operational.

During her welcome speech at the networking event, chair of the NEa Executive Board Dorette Corbey announced that the registry was completed early and well below budget, with increased functionality. It has since been nominated as the ‘best government ICT project’ by Computable. ‘ICT is becoming ever more important. This is a learning opportunity,’ says Corbey.

At the event, the around 100 attendees listened to a presentation by Petrouschka Werther on how the registry was developed. NEa project manager Jeroen van Bruggen gave a presentation on the workings of the system governing Renewable Energy for Transport, of which the registry forms a key component. The registry has made data more reliable and easier to verify, and increased the speed and user-friendliness of processing.